The WA Beach Championships is a mixed-gender beach tournament held annually. Beach Ultimate is a variant of grass Ultimate. The rules are the same with the exception that Beach Ultimate is played on a smaller field (75x25m) and is generally played 5-a-side.

2. Fees
2.2 Fees are set by and approved by the WAFDA Executive Committee.
2.3 The host is responsible for the collection of all fees applicable to the tournament.

4. Rules Accreditation
4.1 For Phoenix Has Risen, all players on your roster MUST be STANDARD rules accredited.
4.2 Additionally, a minimum of four (4) MUST have the advanced accreditation (this number must include the team Captain and Spirit Captain).

5. Rules of Play
5.1 The 2019 WFDF WFDF Rules of 5-on-5 Beach Ultimate will be followed.
5.2 If bad light or extreme weather forces stoppage of games, the schedule will be revised using the guiding principles outlined in WFDF rules will apply as per Appendix B5.
5.3 Where possible games will be rescheduled. Time caps and points caps may be reduced to allow games to be rescheduled.

6. Equipment
6.1 Any flying disc acceptable to both captains may be used, however non-white (i.e. yellow, orange, pink) discs are preferred.
6.2 Each player must wear a uniform that distinguishes their team.
6.3 No player may wear items of clothing or equipment that reasonably could harm the wearer or other players, or impede an opponent's ability to play.
6.4 Playing barefoot is highly recommended, but players may wear socks or any kind of foot covering of a similar texture, so long it respects 6.3.

9. Forfeits
9.1 Teams are expected to take the field on time. If a team is unable to field at least five (3) players from their permanent roster ten (10) minutes after the scheduled game start time, they automatically forfeit the game.
9.2 Gender Split alterations must align with rule 7.3
9.3 Teams will forfeit if they field an unpaid player.
9.4 Teams will forfeit if they field less than five (3) players at any point.
9.5 A Forfeit will result in a 13-nil result.

11. Field of Play
11.1 The playing field is a rectangle area with dimensions and zones as shown on Figure 1 and should be essentially flat, free of obstructions and afford reasonable player safety.
11.2 The entire playing surface of the field of play must be sand
11.3 The brick mark is the intersection in the central zone set fifteen (15) meters from each goal line, midway between the sidelines. 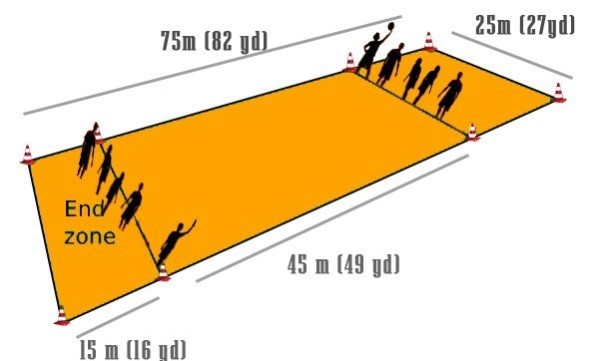 12. Tie-Breakers
12.1 In the event that two or more teams have the same win/ loss record (or a number of points) at the conclusion of the round-robin or cross-over matches, the higher placed team will be decided by applying the following WFDF Ranking Criteria and Tie Breakers rules:
12.2 After round-robin pool play, rank all teams in each pool by the number of games won. If teams are tied, break that tie using the ranking criteria.
12.3 Each ranking criterion is used to rank all of the tied teams, not just to determine the highest-ranked team.
12.4 If, after the application of a ranking criterion, all of the teams remain tied, go to the next criterion.
12.5 If not all teams remain tied, but one or more subgroups of the teams remain tied, separate these subgroups from the ranking. Each subgroup is then to be ranked separately, starting with the first ranking criterion.
12.6 Ranking criteria, in order: