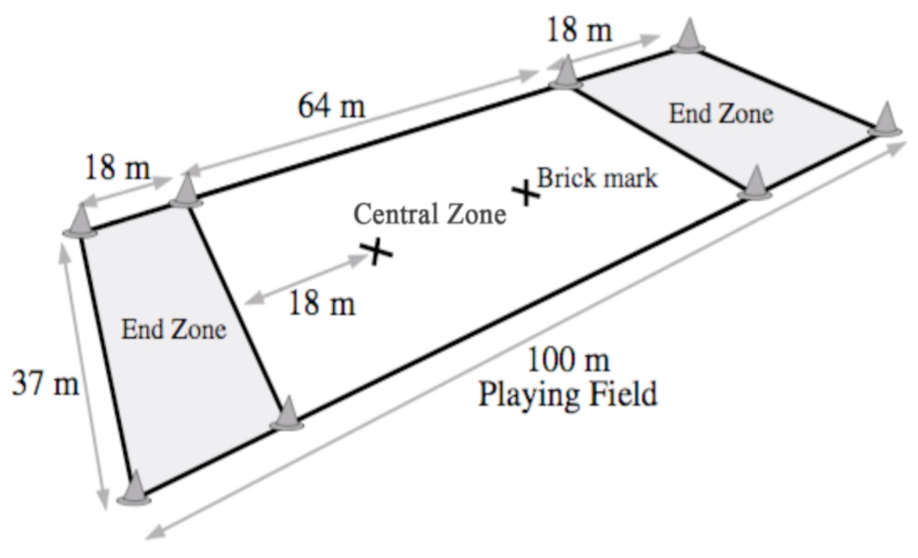 The Pull
Each point starts with a throw-off from the goal line (“pull”). All players must remain in their end zone until the pull is thrown. At the start of the game a toss decides which team throws the first pull.

After a goal is scored, play stops. The team that scored stays in that end zone and throws the pull and becomes the defensive team. So, teams change their direction of attack after each point.

You are allowed to throw the disc so that it flies outside the playing field and then comes back in.

If the disc goes out-of-bounds, it is a turnover. It does not matter which team last touched the disc. Play continues from the spot where the disc left the field.

No running with the disc
You are not allowed to run while you have possession of the disc (“travel”). After catching the disc while running, you must stop as quickly as possible. Once you stop, you must keep one foot still, but you are allowed to move the other foot: this is called pivoting.

The 10-second rule
The thrower has 10 seconds to throw the disc. A defender can stand in front of you (remember: no contact!) and count aloud to ten in one second intervals. If the disc is still in your hand at the “t” of “ten”, the other team gets possession of the disc.

Turnovers
The defensive team takes possession of the disc (a “turnover”) if the offence fails to catch a pass, if they catch it out-of-bounds, or if it is intercepted or knocked down by a defensive player.

the marker reaches “ten” before the disc was thrown
the disc is handed from one player to another without being thrown
the thrower catches their own throw without the disc being touched by anyone else
the offensive team tries to catch the pull, but drops it
After an in-bounds turnover the other team may immediately resume play at the point where the disc was caught or stopped.

Ultimate is a non-contact sport. Physical contact should always be avoided.
Contact that is dangerous or affects the outcome of the play is a Foul.
The thrower may not be defended by more than one player at the same time (“double team”).
The marker may not come closer than one disc diameter to the thrower (“disc space”).
The marker may not hit or grab the disc out of the hand of the thrower. They may however try to block the disc with their hands or feet after it is thrown.
If opposing players catch the disc at the same time, the offensive player gets possession of the disc.
Players are not allowed to create shepherds, picks or screens to obstruct the path of defensive players (“pick”).
Making a Call
If you believe you have been fouled by an opposing player, you can call “foul”, and play stops immediately.

After play stops, you explain what the foul was and discuss this with the other player involved. If the opponent disagrees that there was a foul, they may call “contest” and the disc is returned to the previous thrower. If they agree that there was a foul, they call “uncontested” and, generally, you take possession of the disc. Play is resumed with a “check”: the marker touches the disc in the thrower’s hand and calls “disc in”.

Scoring
You score a goal if you catch the disc in the endzone that you are attacking. If you are in the air, your first point of contact must be in the endzone. The first team to 15 goals wins, with a time cap of 90 minutes, but this can change depending on the level of play.

Substitution of players
After each point you may substitute as many players as you want.

SPIRIT OF THE GAME
Ultimate relies upon a Spirit of the Game that places the responsibility for fair play on every player. There are no referees; the players are solely responsible for following and enforcing the rules, even at World Championship. Competitive play is encouraged, but never at the expense of respect between players, adherence to the rules, and the basic joy of play.